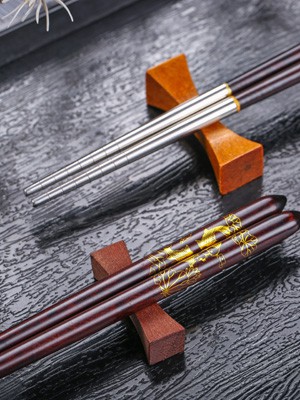 All About “Kuàizi”-Chopsticks in China

Chopsticks are as old as Chinese civilization as this is the place they originate. Their style has been ever-evolving for the millenniums since they were introduced in the Neolithic Age. Here is what you need to know about the Chinese chopsticks – a symbol of the Chinese culture and traditions.

The Chinese term for chopsticks that is used nowadays is kuàizi (筷子) where the first character means “quick” (快) and the second means “bamboo” (竹). However, in Ancient China they were first referred to as “Jia” (箸). Then in the Qin period, it changed to “zhu” (箸), which had the meaning of “tool for picking up food”. Around the late Han and early Ming dynasties, it changed to “kuàizi” as the old word for it had a pronunciation that was close to “stop”, which is one of the words in Chinese that is considered negative and not bringing luck.

The Chinese chopsticks are usually around 10 to 11 inches long. If the sticks are made of melamine, they are almost always with rounded or squared blunt tips, but if the production material is bamboo or wood, they are more likely to have pointed tips. The chopsticks in China are not tapered and are relatively thicker compared to the chopsticks in Japan.

Chinese people pick food from a further distance because they have to pick up the food from shared plates on the table. They use gong kuai (shared chopsticks) to pick up food from these shared dishes and serve them on their own plate.

Their design can vary a lot. Some of them are engraved with different colors and carry messages from Chinese poems. Others are visually richer by having different ornaments or settings painted on them.

What materials are used?

The Chinese chopsticks have been historically composed of almost any material so there have been over 200 different types only based on the material used and its source. The most common sticks nowadays are made of melamine plastic. They are used mostly in restaurants because they are easy to clean and durable. Their demand is on the rise as the Chinese government is trying to move away from using disposable bamboo chopsticks due to environmental reasons.

After plastic, the most common types of chopsticks are bamboo and wood (usually sandalwood, cedar, pine or teak). The reason is that they are inexpensive, widely offered and resistant to heat. Other types of materials that are used are metal (stainless steel and precious metals), jade, ivory, and porcelain. However, these are all common only for relatively wealthy families.

During the Chinese dynasties, the chopsticks made of silver had a curious use. They were believed that they could detect poisonous food by changing color to black. However, this was not the case for almost any type of poison. On the other hand, they changed color when used for rotten eggs, garlic, and onion, because the silver is reacting when touched with the hydrogen sulfide that these foods release.

History of chopsticks in China

Originating between 4000 and 5000 years ago, what we now call chopsticks used to be simply bamboo twigs, which were used for cooking and serving food from pots with boiling water or oil. The first evidence of chopsticks use is 3 pairs of bronze sticks, which were 10 inches long. They were found near Anyang (Henan province) dating to 1200 BC. Approximately a century later, the emperor of the Shang Dynasty Zhou was recorded to be using handcrafted ivory chopsticks. The text where this is mentioned is the “Han Feizi” written by Han Fei in the 3rd century BC.

Chopsticks in China were most probably first used as table utensils during the Han dynasty (500-400 AD). However, during the Ming dynasty, they got their current length, a new name – kuaizi – and became widespread. At that time the Chinese population was experiencing high growth so natural resources became scarce.

Food was prepared faster by being cut into small pieces, which was ideal for the inexpensive bamboo chopsticks. Knives stopped appearing on the dining table at that time. Great influence for that to happen had the philosopher Confucius (551-479 BC) and his non-violent teachings. The fact that knives could remind the Chinese of weapons or violence even influenced the shape of the chopsticks as their tips became blunt.

An honorable man keeps well from the slaughterhouse and the kitchen. And he allows no knives on his dining table.

There are certain norms that any local or foreigner should obey when eating with chopsticks in China. Although the Chinese do not follow them so strictly as they once did in their history, it is good manners to at least be conscious of them. Here is a list with what you should or should not do with your sticks:

Why do the Chinese use chopsticks?

Chinese have been using chopsticks almost since the founding of their civilization. It is one of the most recognizable symbols of their culture and history, which the Chinese are proud of using every day.

How do you say “chopsticks” in Chinese?

Do the Chinese use chopsticks?

Yes, the chopsticks in China are normal eating utensils. They are used daily by over 1.2 billion Chinese people.

Are chopsticks Chinese or Japanese?

Although the Japanese are renowned for the long chopsticks craftsmanship, China is the motherland of the chopsticks as they originated there around 4000-5000 years ago.

Who invented the chopsticks in Ancient China?

There is no single person or year connected to the first chopsticks ever created. However, there are 3 legends coming from the Chinese folklore about who and how invented them. Of course, all 3 of them have some historical inconsistencies, but nevertheless, speak a great deal about what the Chinese culture is.